Friendship. What does it mean to you?

I had a weekend full of friends. My friends, Tom's friends, our friends. Old friends, best friends, long-lost friends. I haven't had a weekend like this in a long, long time. It made me truly appreciate the relationships I have in my life... with my friends (who are all so amazing in their own way) and with tt (he was right along there with me the whole time, which if you know anything about me and past relationships, is super important to me).


What does friendship mean to you? To me, it means just that- exciting, challenging, and significant. It's about finding people to love you for all that means...the good, the bad, and the ugly. And it truly IS fabulous. I am so lucky to have such beautiful people in my life. ((and a special shout out to the Laverne to my Shirley on her engagement today !!!! So happy for you both and I love you so

I have been horrible about posting lately and I want to apologize. Last week was a rough one. And this week, I have been crazy busy. We started back on our health kick, however, so hopefully I will be coming up with some super fabulous recipes to share! (that being said, today's recipe is not one I have yet made... but one I definitely want to, stat.)

Today I want to share with my little blog world, my newest discovery. People (all seven of you...), get ready for this.... mason jars. Holy Hannah, are these things amazing. Let me tell you. I have been bringing my lunch in mason jars all week. Sunday night, made my salad- stuffed the whole thing in there (you can fit a TON in), didn't eat it on Monday due to a forgotten lunch celebration, and then had it on Tuesday. You never would have guessed it was made on Sunday due to the fact that these little babes are airtight. Items can be stacked inside, layered if you will (and they actually look pretty once they are put together). You can always tell what is in them. They are dish-washer safe and won't scratch (they will, however, break if you drop them since they are glass). Not to mention they are a complete conversation starter and you look wicked cool walking around with your lunch in mason jars. Well... at least I feel like I do.

Last night, we had a photo shoot (obvs).  Here, you can see how this could potentially make lunch exciting (both the act of making your lunch, and the fact that you brought your lunch and are not enjoying the beautifully sunny 70 degree day...)

I really am living a changed life since I made this purchase from Walmart (gross) on Sunday. tt doesn't share my enthusiasm, as he was the butt of a few jokes on Monday when he brought his into work. Poor little bugger.

(Dedicated to.... a certain someone who loves to read this blog so very much and just couldn't wait for my post about my mason jars because she is jealous of my super fabulous lunches that I bring from home) 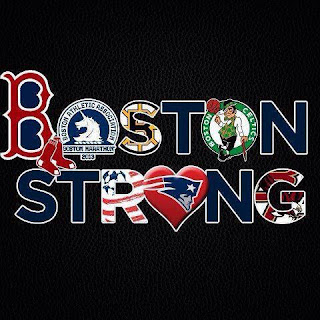 - April 19, 2013 No comments:
Email ThisBlogThis!Share to TwitterShare to FacebookShare to Pinterest 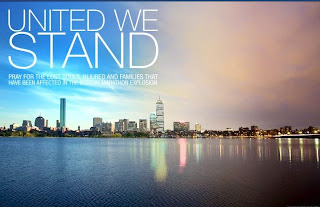 And I'm not saying that in a "OMG I was there when it happened" kind of way- I literally mean, I was there.  Literally a few blocks down the road.... And it's just starting to sink in. Let me start this off by saying that there are no words for the inhumane, selfless acts that ensued yesterday in Boston. There are no words for how physically sick to my stomach this makes me. And there are no words for how united this city really is- and how everyone has joined together through such a horrific tragedy, on such a wonderful, celebrated day in such a wonderful, celebrated City. And so my story begins...

It was the perfect day. The sun was shining, clouds were in and out, and the temperature was a crisp 55 degrees. Beautiful. Situated just before the mile 17 marker, outside of "the club", we were ready with our sign, to cheer our Texan friends on. 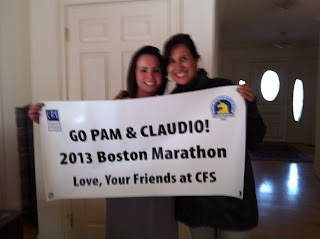 Both of them were complete ROCKSTARS!!! Claudio finished in 2:55:36 at 12:56 pm and Pam finished 3:31:08 at 1:52 pm- seriously, they are absolutely amazing. And thank God for that, because they finished their races, met up, and headed to their hotel before the day took a turn for the worst.

After we saw Pam run by, we had lunch and a beverage, and made a game plan. We'd take the T into the city, do a little shopping on Newbury Street, and then see where the afternoon took us before dinner reservations and meeting up with Pam & Claudio.

The T was pretty busy, because the Sox game had just let out. We got off at Hynes, and headed left towards Newbury St. We stopped in Patagonia to buy a fleece, and time stamped the receipt at 3:04 pm. When we left the store and tried to start walking down Newbury, police were beginning to divert everyone the other direction, and around the corner. The first police officer said "there's nothing to see here" - the second said "walk briskly, folks... there may be more" --There may be more? There may be more WHAT?!--

At this point, we were starting to put things together. The buzz had started with the other bystanders around us. There was an explosion. At the finish line. A second explosion. Blood everywhere. Limbs flying. Terrorist attack. People dying. All we could think of was we needed to get out of the city. Get us the F out of this city.

I called Tom, I called my mother. Neither had heard what was going on. Found out that my BFFs husband and brother who was volunteering were both safe and accounted for. Text messages and phone calls started coming in like crazy- although that only lasted for so long before the networks got bogged down with activity (and ultimately cell service was shut off completely to prevent remote detonation of any additional bombs).

We just started walking. Walking as far away as we possibly could. We walked and walked and walked. What else was there to do? We didn't have a car, and couldn't get back on the T. We kept our eyes peeled for a cab, but the chances of that were slim to none too. Somehow as we passed the crazy frat houses (complete with frat boys sitting outside on leather couches?!) a van pulls up next to us. A girl gets out of the taxi and grabs a suitcase from the trunk. The cabbie tells us just how lucky we are to have found him, and we don't disagree. Freedom.

To put it into perspective, here is a map of Newbury Street. 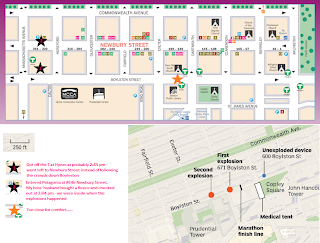 Black stars are where I was- Orange star is appx where the explosions occurred. Proximity is pretty close if you ask me, but the scariest part is the timing. Honestly, had we not decided to head left towards Newbury, and followed the crowd down Boyleston when we got off the T, we would have been walking straight into the explosions. We were in the store for maybe 10 minutes...and checked out at 3:04 pm - the first bomb went off at 3:00.

Whoever was watching over me yesterday, thank you. I have {at least one} guardian angel- I have always known this. And I have definitely made it out of my share of scary situations practically unscathed. I will never take for granted how lucky I am. For my own well-being, but also for those I love. And my love, thoughts, and prayers go out to those families who have been affected by this horrible tragedy. Especially to the family of that precious little boy. Hug your family and friends and tell them you love them. Life is fragile, and way shorter than you think it is.

And when they find the son of a bitch who did this.... well, let's just say that I hope that he is not lucky in any way shape or form.

Love that dirty water. Boston, you're my home. xoXO

What's in your wallet?

Now, that's a loaded question if I ever heard one. For me, right now, it's full of receipts. Particularly from Target. And now comes confession time...

When I have somewhere to go {cue: Marathon Monday} and I need an outfit {um, hello, change of seasons} I can't stop until I get enough. My sister shares this weird OCD-like symptom with me, as does she share much of my cRaZy. The saddest part is that I literally have been losing sleep about this.
Outfit 1- A grey jersey maxi dress with my white cotton cropped jacket. Love this dress, it literally feels like you are wrapped in jersey sheets straight out of the dryer. I have this great spring jacket- structured, 3/4 sleeves, and crisp white cotton.

Outfit 2- A pink polka-dotted hi-lo (although the high is on the sides- super cute!) with a jean jacket. A little more cutesy, not quite as comfy. And of course, I can't find a picture of it. Trust me, it's girly and flirty and peachy-keen. Forecast says 60 and sunny, so either way I think I'm good.

Either way, regardless of outfit, I am definitely wearing these babies:
and yes I realize I will be mixing patterns. Do I care? Really? Do I?

And now, Tuesday is over... and it's on to HUMP DAY.
tt is home and it's time for some QT before bed! xoXO

These are a few of my favorite things {March 2013 Edition}

It's that time again!! Time for my favorite things, which I know you have been just been on the edge of your seat waiting for. Wait no longer. Here we go.

March:
Of all time:

At least I'm ending it with a new, fancy blog! What do you think?!!!