Wellp, tt and I have returned from our annual trip to Pawley's Island, South Carolina. This was our third year going together, and we have always made it special, but this year, it was extra-specially extra-ordinary. The week began pretty standard. We arrived, and it rained. This is the way it typically goes for us. So we had to plan our activities accordingly, since we knew we would have limited sunshine while we were away.

As with most people, on most vacations, the majority of what we do when we are down south is eat and drink- which we certainly did plenty of both. Sunday was a private hibachi table at Mityabi Kyoto because we showed up 20 minutes before closing; Tuesday was my first ever trip to Chic-Fil-A and later, the outside deck at Wicked Tuna along the marshwalk in Murrells Inlet; and then Wednesday we went to Charleston for the day because the weather was actually predicted to be decent.

We got up early and got in the car for the 2-ish hour drive to Charleston. It was a perfect day for a drive: fluffy white clouds against a Carolina blue sky. To get into Charleston, we crossed over the Arthur Ravenel Jr. Bridge, which is absolutely breathtaking. 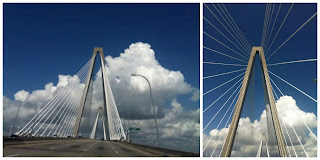 We had decided to start at the gardens early in the day, and head to downtown afterwards to shop and have something to eat. I had been to Charleston a few years back with my family and I was dying to go back to a great spot called Slightly North of Broad {commonly known as S.N.O.B}. We got a little turned around trying to find the gardens. There are a few in the vicinity including Middleton Place and Magnolia Plantation and Garden. We came to Magnolia first, so decided to pop in there because the sign boasted that it is the oldest/largest romantic garden attraction. 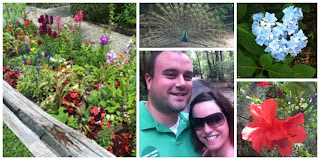 While not a ton was in bloom just yet, the flowers were beautiful. There were animals including peacocks, and ponies {which tt fed, and I watched} and you could take tours of the house as well as a little trolley tour of the grounds. We chose to walk around instead so that we could take our time and see what there was to see. It was pretty busy, probably because the weather had been rainy all week.

We moseyed around the gardens, I took some pictures of the flowers, we saw turtles, alligators, and a snake {oh my!}, and we were having a lovely little day for ourselves. As we were walking, we came upon this big white bridge that stands across the pond right in the middle of the grounds. As we began to cross the bridge, I noticed that there were some maintenance workers on the other side. {I say that I "noticed" them, however there was no way not to - they were using a chainsaw on a tree that had been struck by lightening and fell across the sidewalk, blocking it} - considering everything was pretty quiet, besides the twitter of all the animals, it was quite an upset to the peaceful, serene scene. We stopped on the bridge to look out at the water, and some pretty large fish that were swimming around. At this point, it had started to rain, and I was getting hot and a bit cranky. A break was nice, but we were paused on the bridge for a while, and I was starting to get irritated. It was somewhat narrow and there were a lot of people crossing, as the maintenance people had stopped hacking away at the tree, so I felt that we were in the way, and I just couldn't understand why we were still standing on the bridge.

It stopped raining, I glanced over at tt {probably rolling my eyes, and about to complain yet again that we were still on the bridge} when all of a sudden, he took my hand, and dropped down on his knee.... and asked me to spend the rest of my life with him. From there, it all is a blur.

I could hear clapping. All of the people {including the maintenance guys} had been watching, and started clapping for us. As we crossed the bridge, everyone was sharing congratulations, and tt pointed across the way to an artist that was set up facing the bridge. He said "I hired her" - which I didn't believe. But it turned out, he had hired Elaine to paint the scene of our engagement, so that we would have a keepsake of our special day. Eek! We walked around a bit more, then headed out to make our phone calls {even though apparently... my entire family already knew this was happening!} and to get prettied up for our fancy dinner at Nosh, which included my favorite Pinot Grigio on ice upon our arrival, our own personalized menu, and a private room for us. Tell me that he didn't think of everything. I'm getting butterflies all over again thinking about it. 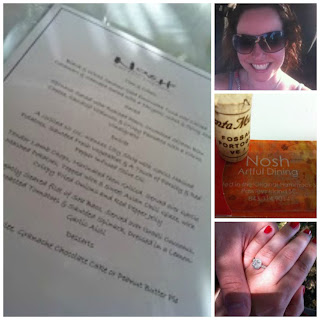 It was the perfect day. The rest of the week was very dull in comparison, but I will share our food adventures anyway. Thursday we had Italian subs at Landolfi's and dinner out on the deck at Quigley's during a thunder and lightening storm; Friday was gorgeous out so we sat out for most of the day and grabbed lunch and happy hour beverages at Sonic; and Saturday we had lunch at High Cotton in Charleston during our return visit to pick up the painting, which came out absolutely amazing. 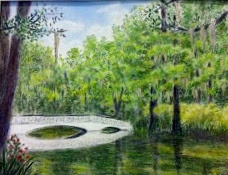 And now we are home, and about to start a whole new adventure, as an engaged couple, and I am so excited to start this chapter in our lives! I'm just so incredibly lucky to have been picked by such an amazing man. I still don't even have words for how special I feel. And on that note, stay tuned as the plans unfold!! 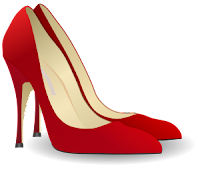