Woohoo!!!! -1.6 this week!! I'm now down 11.2 in total, so maybe I'll get this ball rolling again.
4 months just about to the day until the wedding- there is no 31st in April- so I still have some time. If I can hit the 15 mark soon and then focus on the last pesky 5 lbs I think I'll be ok.
But I guess I need to start working out. I say that every week, but I think I mean it this time.
Gross.
- April 30, 2014 No comments:
Email ThisBlogThis!Share to TwitterShare to FacebookShare to Pinterest

And also, if you haven't watched this- watch it. And make sure you're not drinking anything while watching because it may or may not come out your nose. And let's just say that's an educated guess.

- April 29, 2014 No comments:
Email ThisBlogThis!Share to TwitterShare to FacebookShare to Pinterest

Tomorrow is Wednesday, and in anticipation, I thought I would post a little post before my weekly weigh in goes up tomorrow AM {that is yet again, the only time I actually post- although I did post the deeeeelicious Easter Dessert recipe the other day!}

Ok ok, y'all know I'm busy. I'm not going to bore you with the gory details of my never-ending-stressful life that consists solely of work and wedding plans. You know the drill, you get the picture. It's amazing that tt even wants to marry me these days, I'm such a horrible witch all the time. I'm worn down to the point where I think I'm getting sick. It could be allergies, it could be sickness, I don't know but either way I feel like garbage and am headachey and congested 24/7. Maybe it's the booze. But more than likely, it's the stress. It's a killer.


{not the part I wanted, but will do the trick
I just hope my sister sees this for the appreciation factor only she could have}

I still have managed to cook up some awesome dinners. My newest fave, though, is for lunch. That's right, lunch. It has flavors that make my tastebuds sing. It has healthy fat, it has protein galore AND the presentation is just adorbs. #checkitout 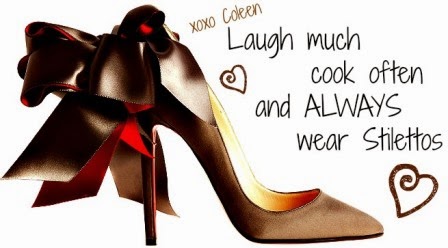 - April 29, 2014 No comments:
Email ThisBlogThis!Share to TwitterShare to FacebookShare to Pinterest

OMG- so.. I totally suck at updating!! I just realized my last update was a Wednesday Weekly Weigh-in BUT it was like two weeks ago.. #fail.

So, I weighed in this morning- general consensus is... I need to stop allowing myself to use PMS as an excuse to eat whatever is put in front of me... i.e. Easter candy. Or the beautiful colored roasted potatoes SF and I made for Easter dinner for the royal fam {note: yes, I made sweet potatoes for myself.. and yes I still ate the other ones the minute they came out of the oven}. Or, the delightfully sweet, made-from-scratch carrot cake whoopie pies we made for dessert. Or the fact that I have eaten sushi twice in three days. Either that, or I just need to lay off the sauce.

Ok now I know you're just itching for the recipes above. We also made Pistachio Crusted Rack of Lamb. Well, by "we" I mean my sister did.

But, you're gonna have to wait ;o) xo!
- April 23, 2014 No comments:
Email ThisBlogThis!Share to TwitterShare to FacebookShare to Pinterest

Ok now it's time to get for serious. Last week after my gain, I was happy that it all evened out (and went down) as the days went on. Unfortunately, it didn't help me through the weekend because I'm back to where I started. Last week...! Not the actual beginning eek!
I blame it on the al-al-alco-alcohol.
(Red wine to be specific. It was a stressful weekend. It's been a stressful week. I like wine.)
I had intended to start a Tue/Thu/Sat exercise regimen but with the amount I have been working and then the issues we have been having with the cable and internet that didn't start yesterday. Or today. There's always tomorrow- but it's the horrifying reality that I HAVE to work out in the morning. Which is what makes me hate it so.
Will keep you updated Obvi.
But this bridesmaid/bride/moh needs to get herself into shape...and fast.
- April 09, 2014 No comments:
Email ThisBlogThis!Share to TwitterShare to FacebookShare to Pinterest

Wedding season has officially kicked off.

I had joked going into 2014 that it would be non-stop and go-go-go all year. From start to finish, I wouldn't really stop until the holidays were over. In my head, I thought that I was overreacting, but let the words come out of my mouth. Little did I know that I would be jinxing myself into this actually being the case.

On paper, I have five weddings this year, in four states. I'm in three, one of which is my own. In one, I am the Maid of Honor {technically I will be a matron by then}. Two happen to be over the same weekend. One, I won't make it to as it is six days after mine. The brides in my life have Memorial day, Labor day, and Columbus day weekends covered.

Starting next weekend with the first bridal shower, and ending in October with the last wedding, I will be essentially unavailable from now through then because I will be tied up with wedding-related activities, as a bride, maid of honor, bridesmaid, and guest.

But don't for a second think that I am complaining. I am so thrilled and honored to be a part of these weddings this year, and obviously I am ecstatic to be planning my own. My besty doesn't know it but I cried when she asked me to be her MOH {it's a new development in her wedding planning, and I was just so excited I couldn't help the tears} -- It's such a happy time, and stressful time, and expensive time, and joyous time. I'm overridden with emotion.

I also have so much left to do that it's not even funny. Yes, big stuff is done. Yes, we picked out and purchased our wedding bands. BUT- we still haven't picked a cake. We still haven't decided on any of the music. We still haven't finalized our invitations and stationary {although I'm hopefully in the final review stages, just waiting on the 6th proof I've asked for} We still have a lot to do. Eek!!!

So, I guess I'll see ya when I see ya, and I apologize in advance that I probably won't be talking about anything that's not wedding related for the foreseeable future. I don't want to be one of those annoying brides, but when I'm this head first in weddings all year, I don't think it's 100% my fault. ;)

- April 05, 2014 No comments:
Email ThisBlogThis!Share to TwitterShare to FacebookShare to Pinterest

Paleo is my friend

So my weekly weigh in proved a gain, but overall I'm now down over 11lbs. And I'm somehow finding all these yummy things to eat!! Not sure how I'm going to pull off our cake tasting in a few weeks... But we shall see.

Will get some more life updates over on the weekend between wedding plans and work!

Visit the recipe page for a new and exciting Paleo option for one of my all time faves!!
{on the iPad it's not as easy for me to provide the links and stuff so you'll have to do a little work for this one hehe}

- April 04, 2014 No comments:
Email ThisBlogThis!Share to TwitterShare to FacebookShare to Pinterest

Wellp, I'm disappointed to report I gained this past week. May have been to do with the three (four?) pieces of greasy, cheesy, basily and delightful pizza I literally gorged on Friday night. May be in part bc I am retaining water this week. Either way you dice it, my bloggy friends, I'm +1.8 and not proud. Hard work to follow to make up for that gross gain...maybe nows the time to stop saying I'm going to workout and actually work. out.
Upside? I fit into my bridesmaid dress :)
Mission #1 accomplished.
- April 02, 2014 No comments:
Email ThisBlogThis!Share to TwitterShare to FacebookShare to Pinterest
Newer Posts Older Posts Home
Subscribe to: Posts (Atom)